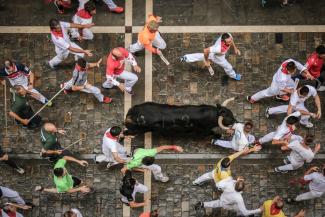 Markets are not driven by one factor, rather a slew of changing conditions on any given day. On that note beware the “market did THIS because of THIS today” headlines and stories. Predicting turbulence on a flight route is easier than predicting human behavior and, thus the panic we are currently witnessing in markets. That’s not saying turbulence happens without any signs mid-flight. Just don’t be the passenger that rips open the doors and tries to jump out. (That won’t end well for anyone, but likely, it would only end incredibly poorly for the individual that attempted this.)

Remember that less than half a month ago, markets were at all-time highs. Bear markets almost always do not begin like this; a sharp steep downdraft. Rather bear markets announce themselves with a whimper, unlike a sharp and sudden downdraft.

Keep a straight head on you, take a deep breath. Ignore the media at this point. It’s theatrics at best, lunacy at worst. This is what mass hysteria and panic look like.

We will have more to say soon...stay calm while the herd panics.